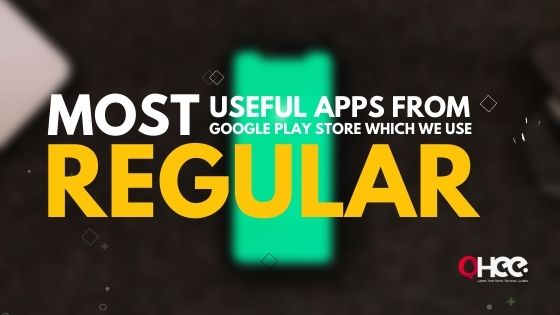 Most Useful Apps from Google Play Store – Now smartphones make our lives easier. We use smartphones to listen to music, play games, watch videos and communicate with each other on social media.

There are lots of apps that make almost all of our work easier. Here we have listed the top 10 most useful apps from the Google play store, which will make your life easier and also make your work faster.

Here we have listed all the most popular apps which will surprise you. To know about this, you have to read this article carefully till the end.

WhatsApp is the most useful and popular app in 2021 with more than 2 billion users worldwide. This feat is even more surprising, given that the app still lacks widespread popularity in the US.

WhatsApp is the world’s most famous instant message tool after Facebook bought it for $ 19 billion in 2014.

It also allows users to send text and voice messages and also lets you make voice and video calls easily. In addition, you can also share images, documents, user locations, and other content in Whatsapp.

Facebook is the second best and most useful social media app that lets you connect with new people and make new friends around the world. You can also share images, videos, and more on Facebook.

Now, Facebook has a total of 2.6 billion users and a higher number of downloads worldwide. It’s not surprising to see Facebook still so high on the list after a lot of Movements on Facebook.

Instagram is another most popular and most useful app for business owners and marketers including normal users as well. It has almost 1 billion users worldwide. Instagram lets you share images, Reels and stories.

It is also yet another Facebook-owned app. Instagram was created by Kevin Systrom and Mike Krieger. But, in April 2012, Facebook acquired the service for approximately US $ 1 billion in cash.

Snapchat is another best useful and now most popular app, that lets users immediately snap and exchange photos with one or several friends. One of the best features of Snapchat is that pictures and messages are usually available only for a short period of time before they become inaccessible to their recipients.

You can also put photos in “My Eye Only” so that you can keep your photos in a password-protected location.

Google Drive is also a great app among all these most useful apps from Google play, with a cloud storage solution available on Android where all new users get permanently 15GB free space upon signing up.

Maps is an excellent app and is becoming ever better, useful, and popular. Google Maps tells you exactly how to reach your destination.

It even supports Uber on foot, bicycle, and mass transit directions as well. Google Maps is virtually the master of navigation apps view and is one of the best Android apps ever. If you add the Waze experience to it, including many of its own features, and you won’t need any other navigation app.

It is unique and fun in ways that Google Maps is a very useful app and we also highly recommend it.

Nowadays it has become the most popular app for LinkedIn practitioners, helping them grow their business and more.

LinkedIn was originally designed for online businesses and business owners, so there you can find good people and like-minded entrepreneurs. However, the purpose of the LinkedIn app is to become a partner of the LinkedIn web service that you visit every day and generate leads after that

Youtube is the most popular and useful video platform worldwide. Here, you can find solutions to any of your problems from experts and knowledgeable people. However, you also get ad-free YouTube with background video play and offline downloading.

There are over a billion hours of YouTube videos consumed every day, and hundreds of hours of video content are uploaded to YouTube servers every minute.

It was founded by Steve Chen, Chad Hurley, and Jawed Karim. Youtube also has numerous apps including Youtube Kidz, Youtube Music, and Youtube TV that gives you great features and helps you to watch movies, Listen to Music, and Watch TV Serials, and many more.

Gmail is also the most popular and useful app, which allows users to send text messages and receive their responses. In addition, Gmail is a free email service provided by Google, which helps a lot of people in exchanging messages.

In 2019, it had 1.5 billion active users worldwide. Gmail also lets you send personal messages to others.

Amazon is also the most popular and useful internet marketplace, which helps a lot by going to market in this even hard situation. From here you can buy anything you want online.

In conclusion, I hope you have enjoyed this article. We have listed the top 10 most popular and most useful apps from the Google play store.

We’ve mentioned the best free Android apps you can download today, so you can find exactly what you need by searching through the Google Play Store.

These are great apps that will amaze your life and make your work easier. These apps help you connect with other like-minded people and individuals around the world. You can download these apps from the Google Play store today.