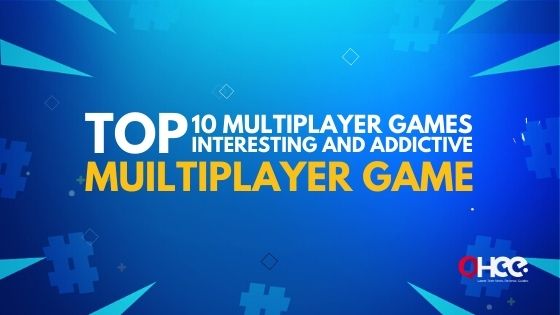 These games are easy to find and easy to play on the go. We have listed only those games which are most popular among gamers and give you large multiplayer options in the game.

These days most games have some sort of multiplayer element in them which doesn’t fulfill our needs most of the time. So, let’s start and explore these action game best multiplayer games for android.

COD stands for Call of Duty which is one of the best multiplayer games for both Android and iOS users. This gives you a top-level wargaming experience.

You know most mobile gamers, such as COD instead of PUBG, which is quite a surprise achievement for the COD Company. We have also talked about PUBG below, so read carefully till the end.

You can play this game easily like other battleground games. There are 100-players in a single match of this Battle Royale Survival Map. You can also team up locally with your friends and also create your own Squad.

Minecraft is the world’s most popular survival game, which comes with amazing graphics. This game allows you to create your own shelter to play this video game. This game is based on the pixel world, your imagination is the key in this game. Your objective will be related to creating and protecting the world around you.

This game is really everyone’s favorite game alone among all top multiplayer games for Android, you’ll need to explore and survive. In this game, you will get plenty of resources to protect and survive.

GTA 5 is literally much better than GTA 4, which comes with many new features for a better gaming experience. If you need a larger collection of planes and helicopters, then you should play GTA 5. In this game, you’ll be allowed to choose your method, planes, and crew on the go.

You will be able to pull missions and make your own plans in this game. And most importantly, this game offers a variety of customization options to be on the top.

You can spend money in many fun ways to purchase clothes, cars, and other elements. Also, loaded with other sports such as tennis, golf, and cycling.

PUBG is also the most played multiplayer game. As a COD, PUBG is also a battlefield game. It allows you to create your own squad to play, but you can also play it as solo and duo. PubG Mobile and PubG Mobile Lite have launched, these are two different versions of this game.

There are a lot of differences between them, such as graphics, number of players, and more. Many people prefer to play this game on PC for a better gaming experience, but it is also available for Android and iOS users. If you have a low-quality mobile then you can run their light version

Nowadays, free fire has become the most played game by gamers. It is a 49-player Battle Royal game that lets players loot and shoot to survive the last one. Garena also supports free-fire in-game voice chat, allowing you to talk to your other peers. It has fairly simple controls and is also easy to navigate.

The basics of Battle Royal Mode are all the same. You will fall on an island and you must find good weapons, as well as medkits to win the war and stay inside a safe zone.

Clash of Clans is also one of the most popular Android games that let you play with your Facebook friends in multiplayer mode. In this game you want to build a city and an army, then drive out the invaders in a tower defense-Esque game mode.

If you want the best multiplayer game on Android then you should not miss Clash of Clans. At any cost, you have to protect your village from other soldiers in the world of Clash. It also requires strategic skills. You can enjoy this top Multiplayer Game for Android as op-gaming.

Among Us is also a great multiplayer game for Android users. It is one of the most played games in this quarter. It is an online multiplayer game that comes with a unique social deduction theme.

You can also play this game on local Wi-Fi with 4 to 10 players. In this game, you along with other companions will prepare your spaceship for departure, but keep in mind, your team has a cheater who wants to kill everyone. In this game, you have to build trust with your crewmates and kill them.

Fortnite is also one of the best and most popular multiplayer games that come with high-quality graphics for a better gaming experience.

This is a 100-player Battle Royal game to play online with your teammates. Fortnite uses cartoonist graphics and lots of fun elements to make the game lighter. There are several gaming modes here.

Hearthstone is one of the best card duel games on Android. It is one of the fastest 2v2 and 3v3 multiplayer games. Also a very exciting card game.

It is available on many platforms that let you play with people everywhere and invite your friends to play together. You can also connect your account, yet you get all your cards and decks in one place.

Asphalt 9: Legends is an impressive multiplayer car game, which gives you a top-level car riding experience. There is an auto-drive system that makes it easy to play on mobile. It gives you smooth gameplay with great graphics.

There is also a new control system called TouchDrive that relies on swipes to drive the car and makes gameplay considerably easier. It comes with multiplayer mode, exceptional graphics, and very responsive controls.

There are many factors that depend on to give you a smooth and hassle-free gaming experience. Either you play on PC or mobile, both have the choice of gamers where they enjoy the most.

Among the top multiplayer games listed for Android, which one or two games do you play with your friends the most, let me know in the comments section below.